(EDITOR’S NOTE: With a commitment to craftsmanship and high-quality materials, the husband-and-wife team of John Dietrich and Diane McNeil have been creating handmade ceramic heirlooms from their rural Wisconsin studio for decades. Ellison Bay Pottery can be found in national and international collections. For more information, visit: ellisonbaypotterystudios.com)

“Perfection just does not exist,” John Dietrich of Ellison Bay Pottery explained to me when I visited his studio-gallery, where he had been producing lovely pottery works since the late 1960s. “I produce about 3,000 pieces of pottery every year. If I come up with three or four pieces that I really like, that come close to what I imagine is the best I can do, I’m happy. That is what keeps me wanting to do it again and again.”

Dietrich has been doing it again and again – making pots that is – for 19 years, producing a wide variety of functional work, from mugs and candle lanterns to more unusual and elaborate lamp bases. His customers obviously like what he’s doing. Pottery is an entire lifestyle for John, one that has been successful and satisfying for him. He enjoys the grass roots nature of the business; he is the designer, the chemist, the builder, the laborer, the janitor, each job being an important part of the whole.

There is the physical process of mixing, molding, and shaping the clay. (He says “clay aerobics” keeps him in shape, along with volleyball and cross-country skiing.) There are the experimental aspects of developing new glazes, new tools and techniques, or seeing, for example, if the glaze will stick to the pot or what the colors will be when they come out of the kiln. There are the times to just sit and think and get inspired. There is pottery as therapy – as a way to relax. John stresses the importance of recognizing the necessity of learning to relax, of striving toward an attitude of “whatever happens is.” There is the personal relationship between potter and client, as enjoyable to John as the process itself. John considers his customers important participants in his art, their feedback being critical to his production, especially in this high-tech world where opportunity for personal interaction does not often exist. Finally, there is the interest the future holds for creating larger, more sculptural pieces. Pottery provides for John the experimental and creative, the excitement and spontaneity, the variety, and the physical and emotional balance that makes his art and business a satisfying and successful way of life.

John’s pottery looks like him, fits him. As I look around the studio and gallery, I see reflections of the man I’m talking to. The work is substantial, earthy, with a touch of humor, a certain “light” quality, which reflect John’s sense of humor as well as his lifestyle in the country. The mugs have handles you can hold onto. Like his personality, the designs are involved but not too complicated, never unapproachable. The tones are earthy, rich and warm: browns to warm yellows to shades of blue to blue gray, different as the sky through the studio window is different each day. And there is the newest color, a deep rich red, strong but subtle, becoming almost a king’s purple. The designs are painterly, expressive, spontaneous, alive, each one an experiment. While there are numerous ways of achieving color and design, John prefers a direct method incorporating colored slips, which are painted and worked immediately onto the wet surface of the just-thrown pot. This “action drawing” or “painting” balances the living quality of plastic clay. John finds this technique exciting and spontaneous, with the added element of the experimental.

This painterly aspect of his pottery is understandable. Both John’s parents are painters. Tom Dietrich, John’s father, served as professor of art at Lawrence University in Appleton for 35 years and is best known for his “regionalist” watercolor and oil paintings which exhibit his unique combination as “colorist” with an “active” brush. His mother, Margaret Dietrich taught children’s art classes at the Bergstrom Art Center, Neenah, while raising a family. Her work exhibits a mastery of design and color. Recently she has enjoyed combing her talents on pictorial stitchery. In this atmosphere John learned line, color and special concepts, and had the freedom as well to learn how to express himself with his hands. John tried painting for awhile in college but soon realized it wasn’t for him. “Pottery is a much more physical, three dimensional process, and therefore appealing to me”; he explains. Yet the painting influence is strong in his pottery. In fact, John often uses his father’s old oil brushes to obtain the color and design effect he wants.

Tools in general are a critical part of the process for John. Tools are the key. Tools serve as the vehicle to shape and form and design the piece. John feels there is a strong correlation between the tools used and the finished product, a direct relationship between the tools used and how they effect his work. In other words, in finding or making or inventing new tools the process is continually evolving, continually recreating itself. While John began making his own wood tools out of necessity, as he had no money, making them is now an integral part of the process. Some tools he has discovered accidentally. One of his favorites, for example, is a caulking gun loaded with porcelain. He “shoots” the porcelain directly onto the spinning pot. The effect is a fluid quality and heightened character. The tools thus become “part” of the finished work just as the potter himself is part of the work. “Everything is connected”, the potter explains.

John began potting at Lawrence University in 1967. At that time his only thought was to begin to understand the process of pottery making. After earning his B.A., in Art at Lawrence, he spent one year at the University of Wisconsin – Oshkosh studying pottery under Paul Donhousen. He subsequently went on to work and study with Abe Cohn at the Potter’s Wheel in Fish Creek. There he was given the opportunity to teach adult pottery classes, to remodel and build gallery space, and most important to learn pottery from the inside out. Then, after 6 years with Abe, John knew the time had come for him to break away and get started on his own.

As a boy, John had spent pleasant summers at the Clearing in Ellison Bay where his father taught painting classes. It seemed natural for him to gravitate toward that area of the county. A series of seeming coincidences led him to Sid Telfer, Sr.’s door. Sid, who owned the property across from the Clearing, was seeking to sell his apple barn. After looking at it, Sid asked John what he thought. “It’s everything I’d ever want”, John replied. “Then you should have it”, said Sid. John didn’t have any money, but they shook hands on the deal. “You’ll find a way to pay for it”, encouraged Sid. “Quite frankly, Mr. Telfer had more confidence than I had at that time”, John remembers. “I’d just like to prove him right for taking a chance”. John recalls a sense of well-being which he continues feeling today with Sid and four generations of Telfers as neighbors.

After acquiring the barn and land, John undertook to transform it into a living/working/gallery space. Like his father, he had a knack for carpentry. The project was a welcome challenge. John started out with a wheel, a little equipment, and very little cash. The first year he bought a pair of cross-country skiis. The next year the studio area was roughed out and a kiln was built. The following year the gallery was built. The place has continued to evolve. Two years ago the potter insulated the studio and put up ceilings. (John is still not quite used to having a warm place to work!) Currently he’s adding a couple of bedrooms upstairs. “It will never be finished”, John comments enthusiastically. “Life, like pottery making, is an evolutionary process not a revolutionary one”.

The process of making pottery, the grass-roots nature of the business, the elements involved, the “barn” up in Ellison Bay somehow fit this man, John Dietrich, his background, his nature, his goals.

Ellison Bay Pottery is located on Garrett Bay Road just past The Clearing Folk School. The gallery is open daily 10-5, May through October. Also on display are artworks by Thomas and Margaret Dietrich. You will enjoy the drive and a unique and interesting viewing experience. 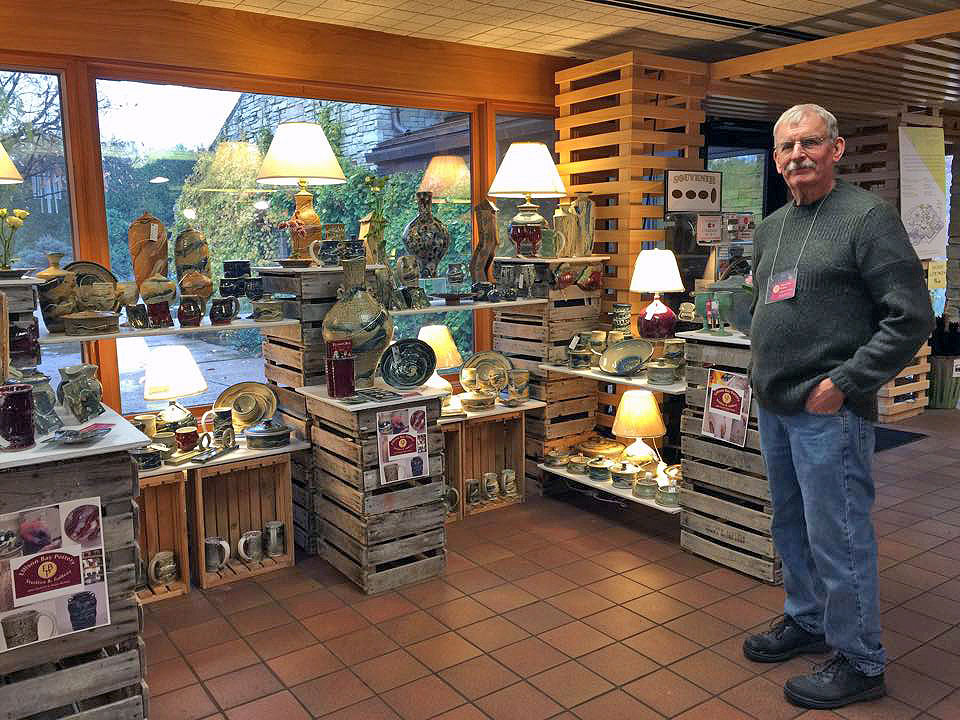 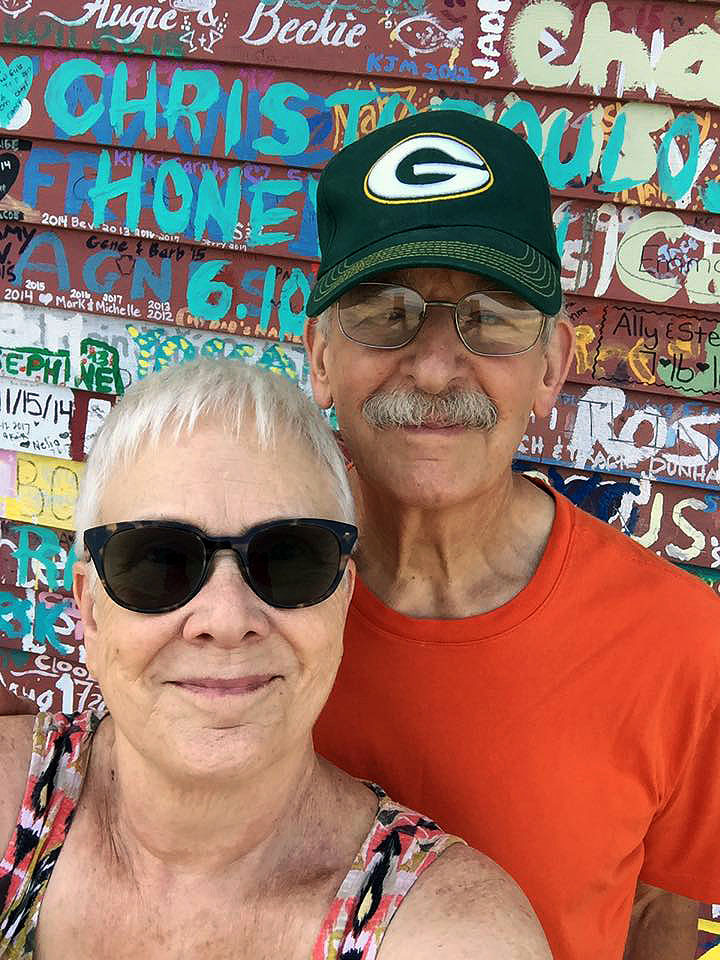 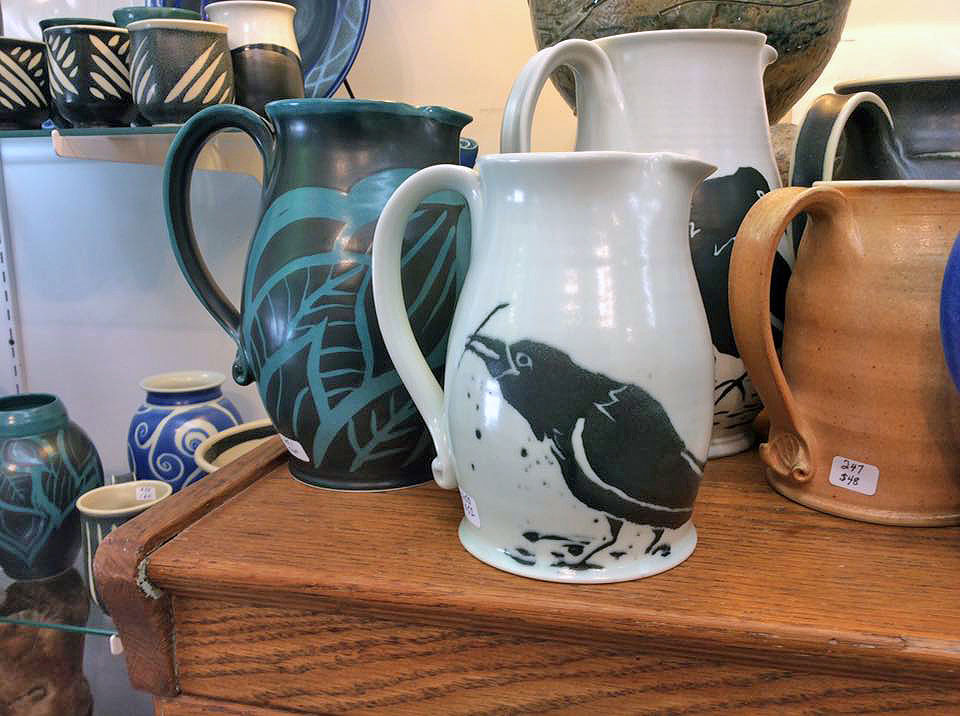 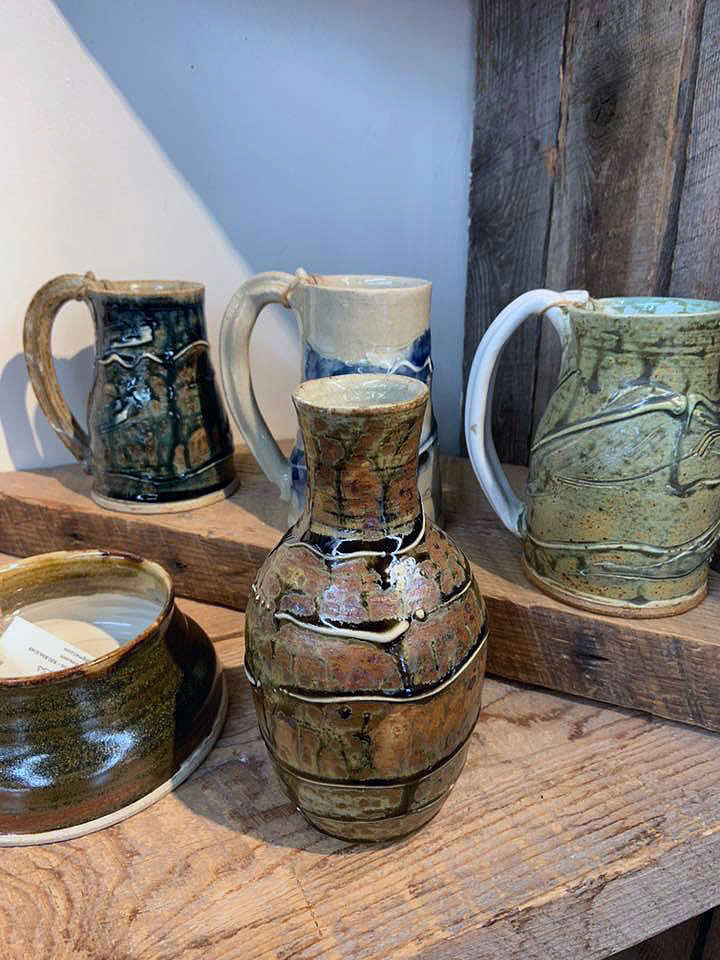 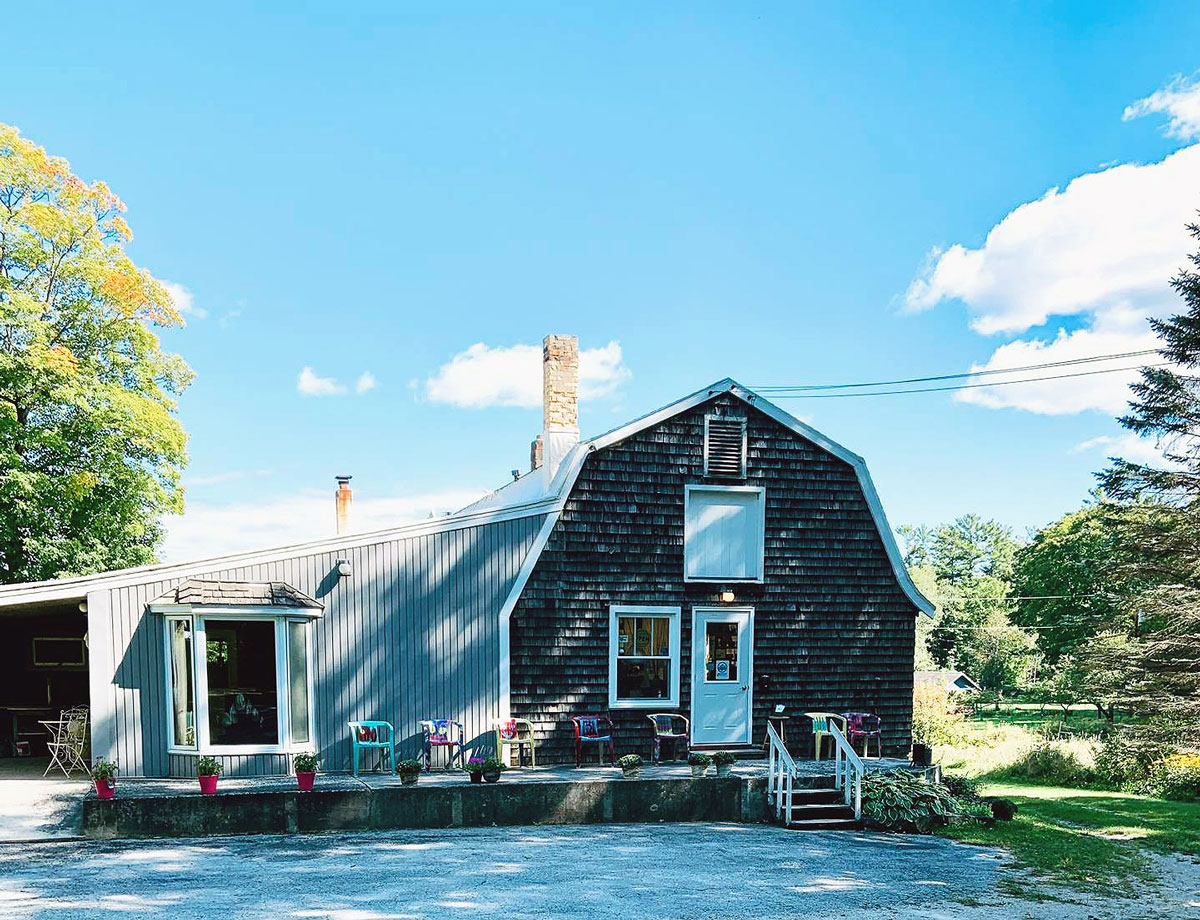 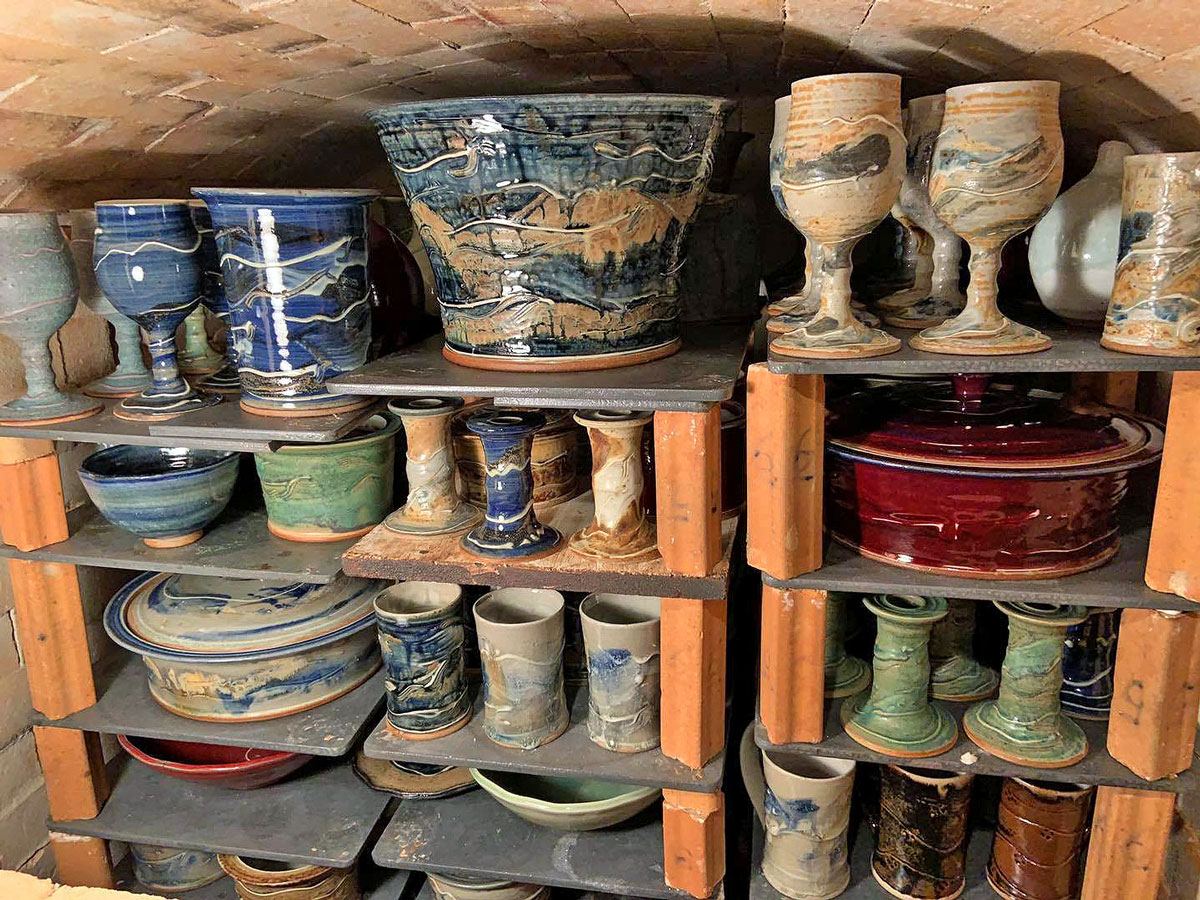 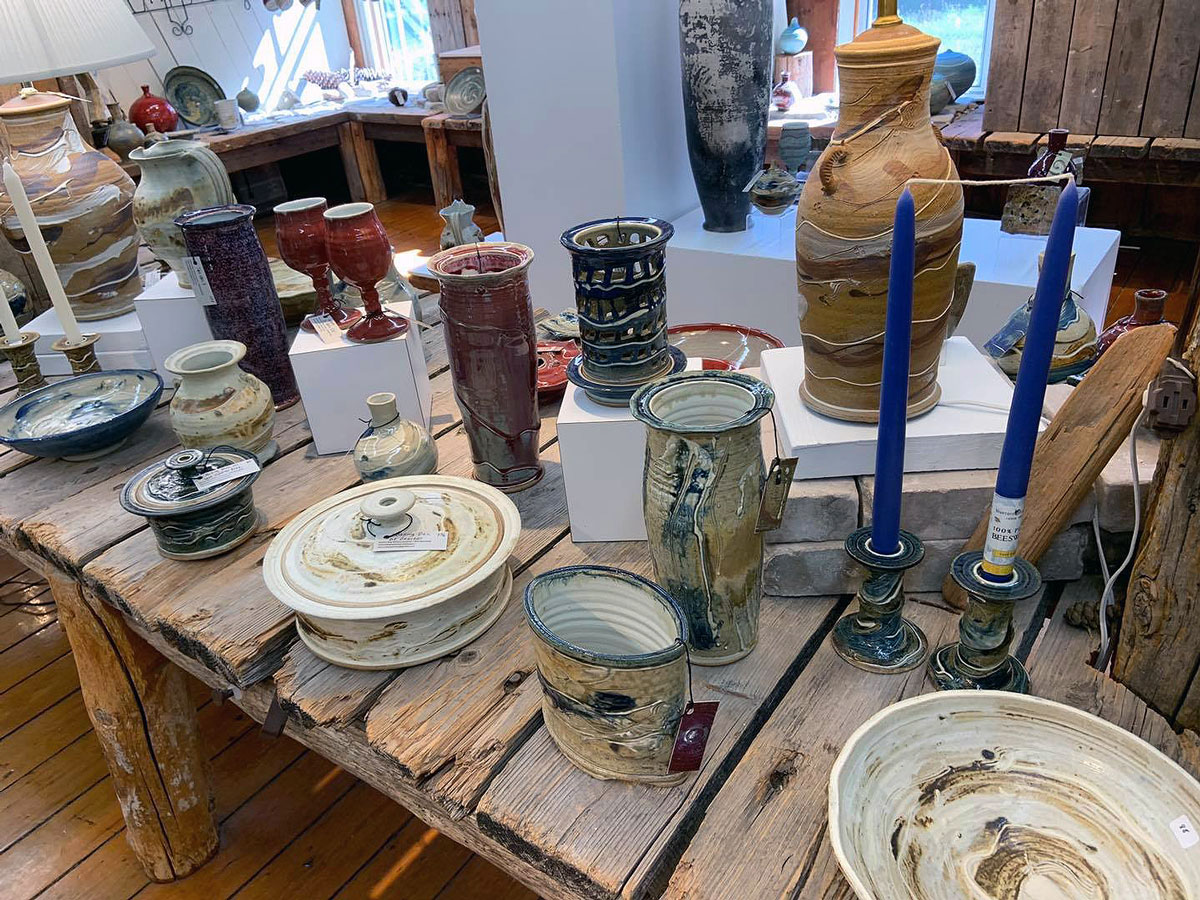 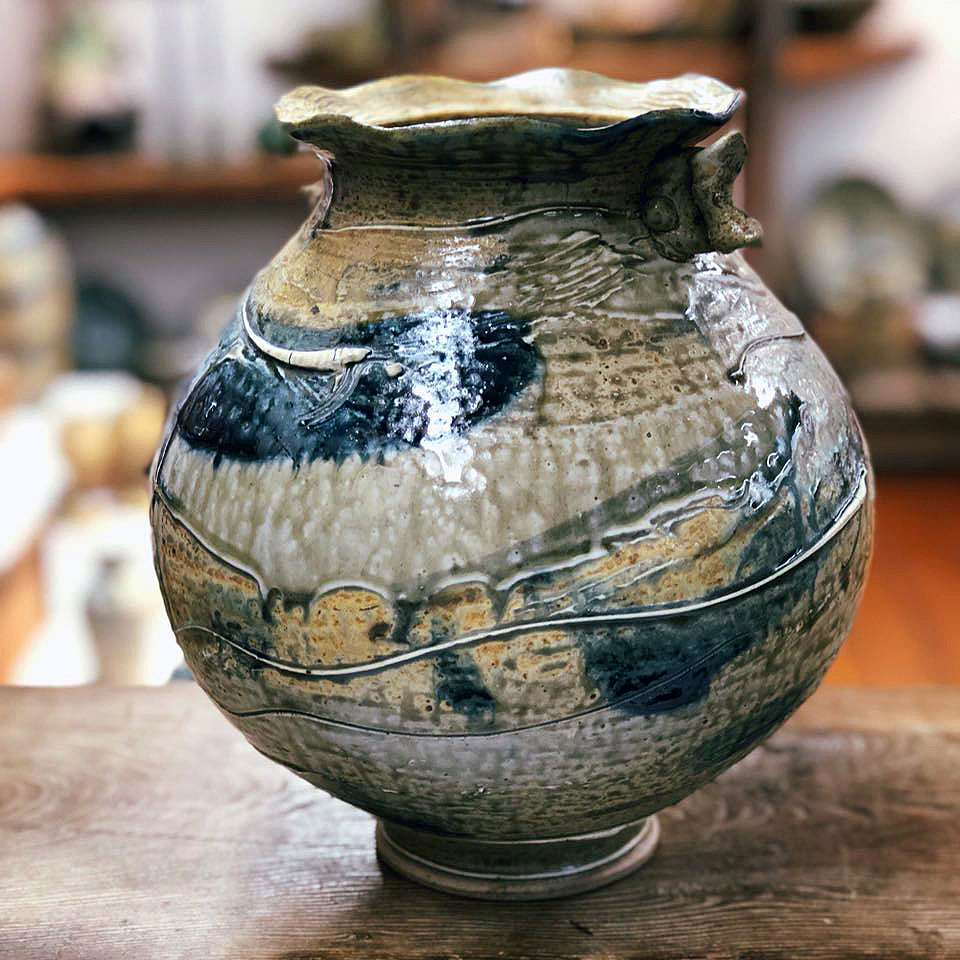