(EDITOR’S NOTE: There are currently over a dozen traditional Door County fish boils, and two of the more well-known are located in Liberty Grove. The first commercial fish boil in Door County was started at the Viking Grill in Ellison Bay in 1959, while the popular fish boil at Rowleys Bay Resort was launched many years ago.)

The “FISH BOIL” has become one of Door Count’s biggest tourist attractions. Many questions have been asked. A fish what? What does it taste like? How is it done? Fish, potatoes and onions all in one pot? Is it a soup? Where did it all begin? Where can I find one? As one of the daughters of the people that “started” the “fish boil” as a business, I’ll try to answer most of these questions.

There are many stories on how they got started. Some say the lumberjacks that came to clear the land started it. Others say the Scandinavian fishermen started the custom. The one I heard the most as a child was the fisherman theory. The story goes that the boats fishing the shores of the Lake Michigan were not equipped with galleys. An old pot-bellied stove served as both a heating and cooking unit. Fresh potatoes and onions could be carried for the short journeys, and there was always plenty of fresh whitefish and trout from their catches, all this boiled in one pot turned out a delicious meal.

Where ever the custom started doesn’t matter. What I’m about to tell you is how the “fish boil”, the delicious one pot meal that so many of us have and still enjoy, began as a business and grew into a big attraction. Just thinking about it makes my mouth water and my buttons burst with pride!!!

The story starts back in the late 40’s when my parents, Lawrence and Annette Wickman, purchased the Viking Grill from his uncle Gilbert Wickman. With a family of five children (four girls, one boy) they decided to try earning a living with a restaurant. They started out small and learned as they went along. Annette was the cook and was always willing to try new things. Everything was made from scratch, pies, rolls, soups etc.

In the early days they served pan fried trout but there was a time when trout was hard to get and whitefish was plentiful, so they tried whitefish hoping the customers wouldn’t object. I’ve been told that Lawrence told his three older daughters, who were the waitresses, that they shouldn’t say it was whitefish, just tell them it’s trout. No one will know the difference! One of the girls said, “Daddy you told us never to lie!” Well, they didn’t and the results were very satisfactory, everyone liked whitefish as well as trout and many liked it better. To tell the truth, I never remember trout being served, but I do remember my dad saying he never would use trout in his fish boil because it had a strong fish taste and it would ruin the whole pot.

Always willing to please the customers, the next suggestion Lawrence heard was, “Why not take the bone out of the fish before frying it!” So he found someone to show him how to accomplish this and fish served from that time on were filleted, except for the fish boil fish which are in chunks. I can still see him filleting whitefish, he made it look so easy. First he took the backbone out, then slid the knife between the bone and the meat on each of the sides. Every bone came out and he never wasted much of the fish. Nowadays the filleting is done by a machine and because fish are not all the same size sometimes you will find a bone.

Another customer asked for whitefish broiled, and Annette not exactly sure how to do this let the customer in her kitchen to show her how. Using a broiler pan, butter the pan, place the fish skin side down, put butter, salt and paprika on top and place it under the broiler. Thus began broiled whitefish! As long as they had the restaurant (1974) broiled whitefish was their specialty!! Remember the broiled whitefish sandwich??? Mmm…good.

As the years went by Lawrence and Annette decided they had to come up with something else to help support the family. Lawrence suggested a motel, but Annette knowing who would get all the work, said, “I don’t want to make beds!” So back to the drawing boards – what could they do?? Over the years fish boils had been put on once or twice a summer by the brotherhood at church or the men’s club in Ellison Bay and Lawrence always helped with them. Often he was asked when the next one would be. They talked it over, would anyone come? Can we make a profit? What if it rains? Many questions were thought over and they decided to give it a try. The back yard was cleaned up, the necessary cooking facilities set up and bought, an addition was made to the garage in case of rain and picnic tables were built. The summer of 1961 the first Viking Fish Boil was held.

During the first years the boils were held on Tuesdays and Thursdays in July and August, and on Fridays only in June and September. Every year the lines got longer and as many as 700 people were served in an evening. People mingled while going through the ticket line, serving line and often shared a table with someone they didn’t know. There was a family picnic like feeling in the air! People seemed to enjoy the time visiting while waiting in the lines. Lawrence enjoyed talking to people, always interested in where they were from, where they were staying, how they heard about the fish boil, what they thought about Door County, etc. I wonder how many times he told the story of how the fish boils started?? – I never heard him complain that he was tired of that one!

The timing of the boil is very important and because he enjoyed visiting so much, Lawrence always had someone helping him keep track of the time. At just the right moment he’d tell everyone to stand back, get your cameras ready, and he’d put fuel oil on the fire under the kettle and cause an overboil – but now I’m ahead of my story – about the boil itself.

A large stainless steel kettle and two stainless steel baskets are used. The kettle was made from a Speed Queen washing machine tub with the hole welded closed and the baskets were made in the shipyard. A fire of cedar slabs is kept blazing beneath the kettle. When the water is boiling a basket containing small scrubbed potatoes is lowered into the pot. Five pounds of salt is dumped into the water. After 10 or 12 minutes, depending on the size of the potatoes, small peeled onions are spread over the potatoes. Then another basket, fitted precisely inside the first basket but not resting on the potatoes and onions, is placed in the boiling water. This basket contains three inch chunks of whitefish. More salt is added to the kettle and the pot is again brought to a boil and exactly twelve minutes later, fuel oil is splashed over the fire to cause the pot to boil over. The flames soar skyward causing the scum formed on the water surface by cooking fish and potatoes to be flushed from the now churning water. When the fire subsides to normal, the fish, potatoes and onions are removed to the serving line. The over boil brings many oohs and aahs and many cameras clicking. It also serves as a signal to the waiting guests that dinner is served!

In the serving line everyone received two pieces of whitefish, potatoes, onions with melted butter over all, cole slaw, pumpernickel or white bread, lemon wedges, pickles and of course cherry pie! Beverages included fruit punch, milk or coffee. When Lawrence and Annette first had the fish boil, only real Scandinavian “egg” coffee was added to the coffee grounds. As the crowds grew it was impossible to keep up making so much coffee that way so the electric perk pots were brought out.

A “fish” delicacy Annette served in the restaurant was whitefish chowder. It all started when there was fish left over from the fish boil. She’s take the fish, potatoes and onions and half and half and turn out a chowder you couldn’t resist, once you tried it!!

Over the years many articles appeared in newspapers and magazines, including the National Geographic, about the Viking Fish Boil. Bus tours arranged to bring their groups for a fish boil. People came once, liked it, told others and the lines grew! It became a big tourist attraction.

Lawrence died in 1973, and because of his love for the fish boil, Mother had “Founder of the Viking Fish Boil” engraved on his tombstone. Annette sold the Viking in 1974 but the Viking Fish Boil goes on, using the advertising of being the oldest fish boil in Door County. I may be partial but I still think it’s the best.

The lines are shorter now because of more businesses that serve one. You can find one almost every night of the week somewhere between Gills Rock and Sturgeon Bay, and you can be sure of a delicious treat!

I like to think that the fish boil played an important part in the increase of the tourist business in Door County. People came, many a part of a bus tour, liked it, told others, came back on their own, brought friends, bought property, etc. It gives me a lot of pride to think that my parents, Lawrence and Annette Wickman, had a big part in the economy of Door County and it all started in a little restaurant in Ellison Bay once called the Viking Grill, and changed to the Viking in the early 60’s when they made an addition to the restaurant. 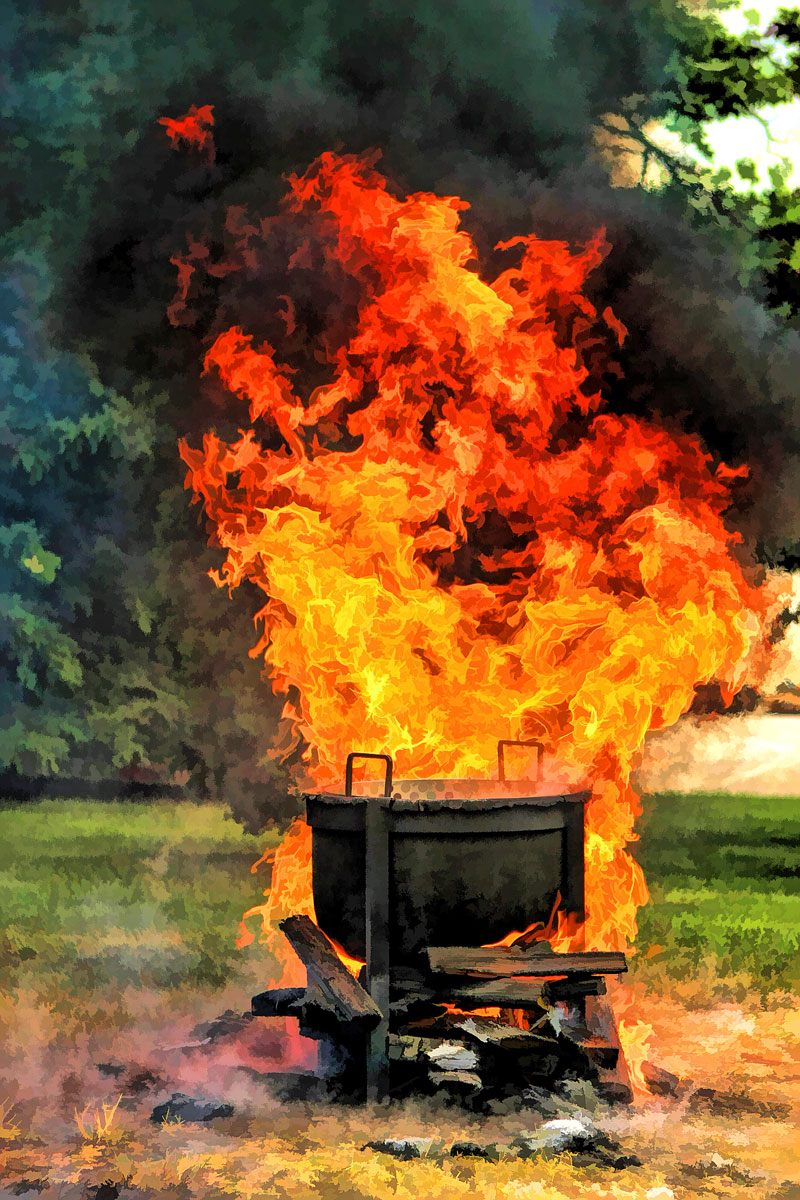 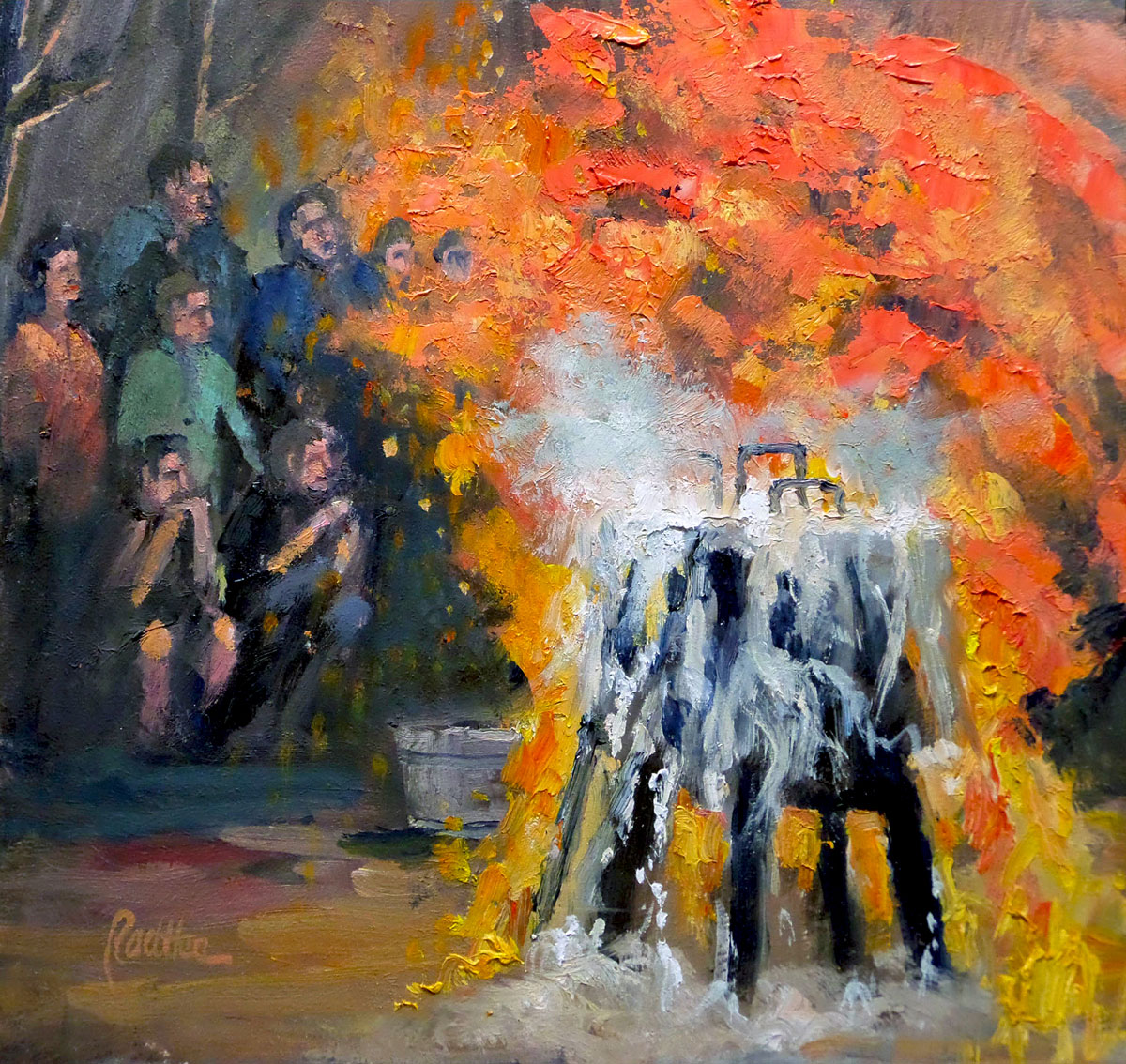 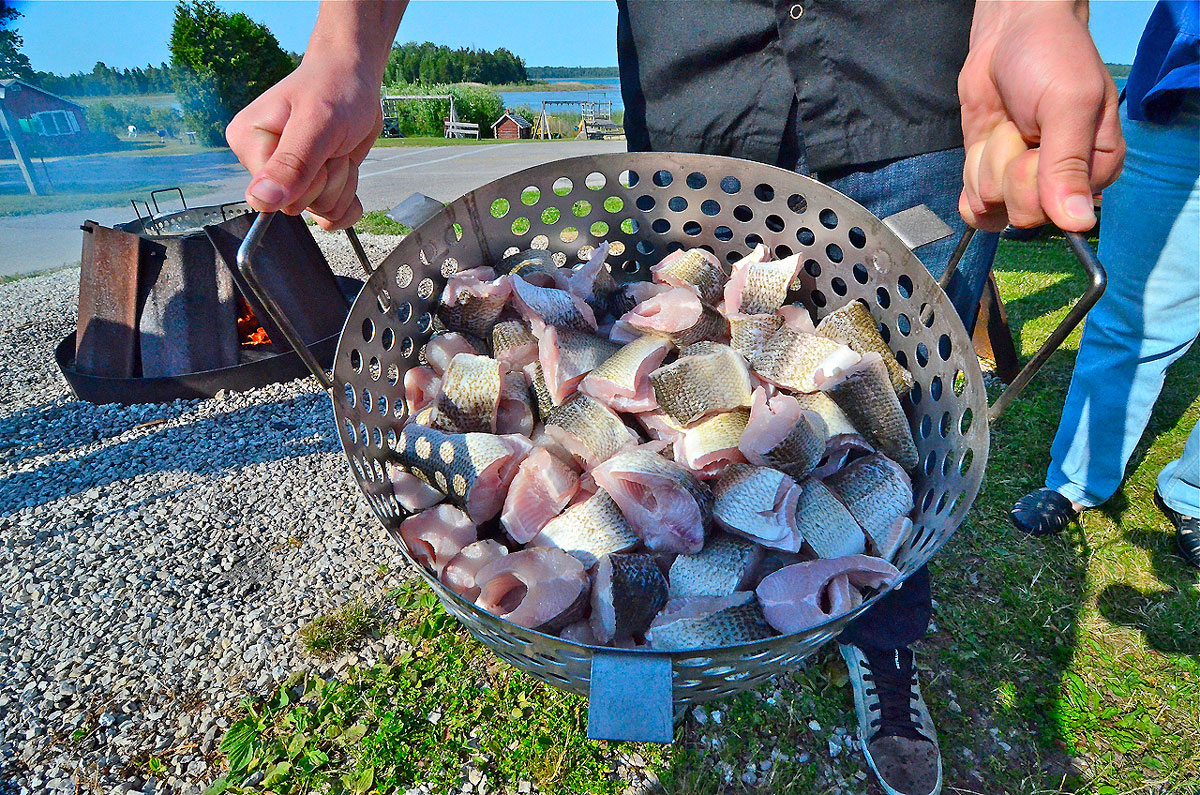 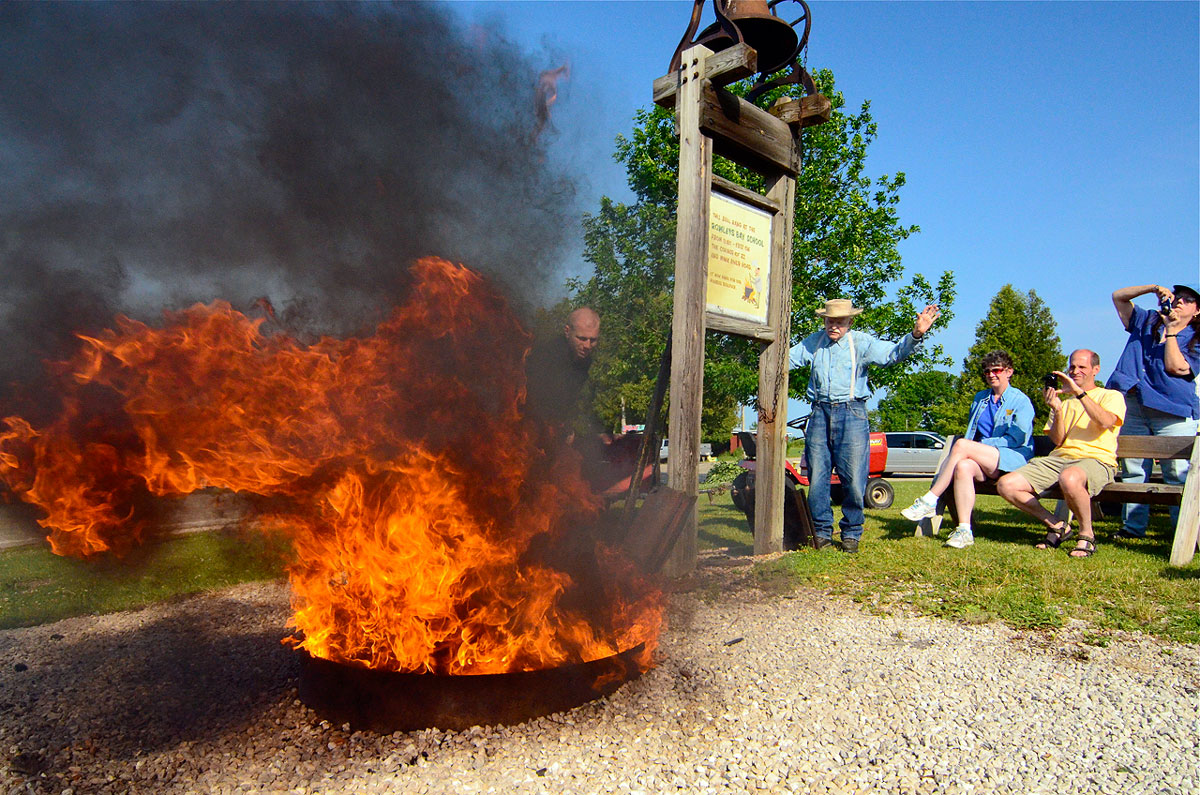 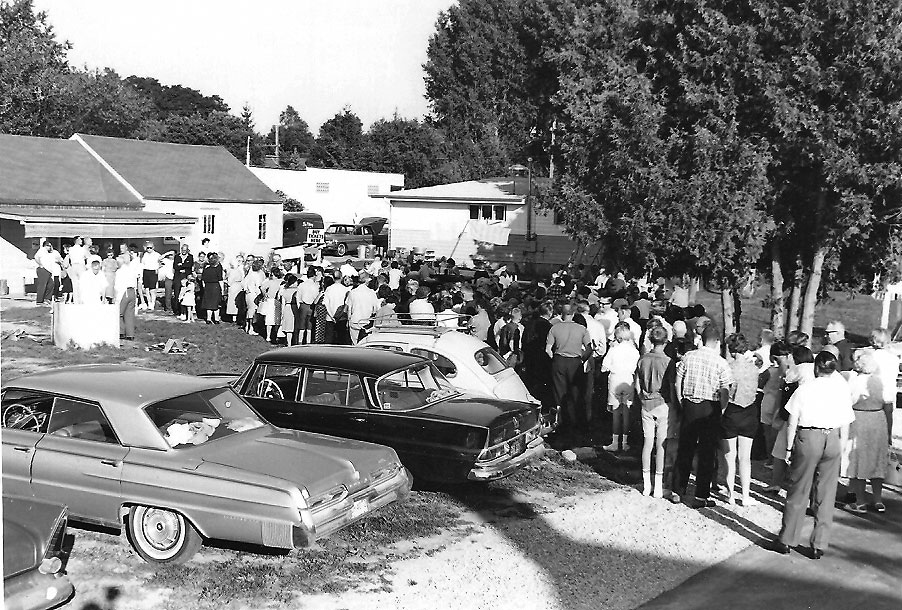 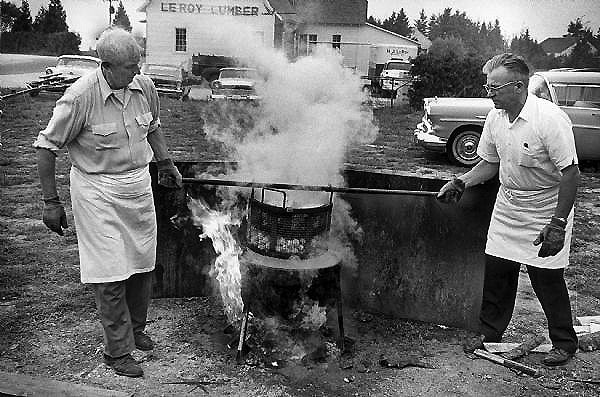 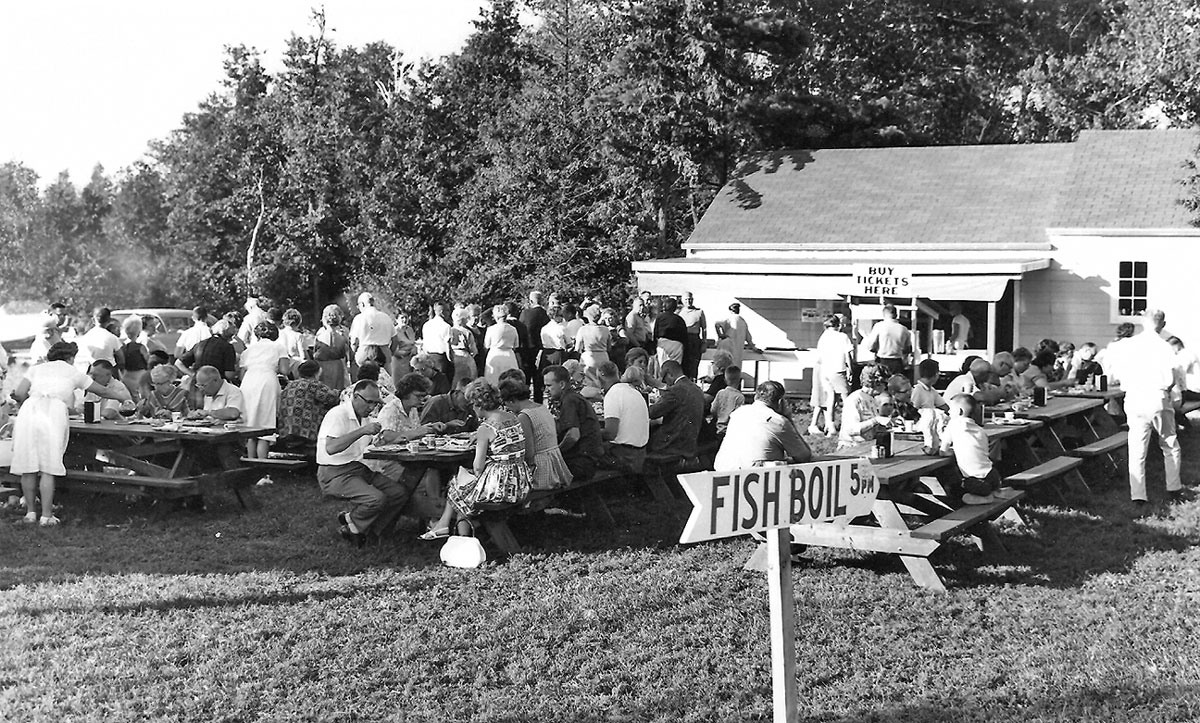